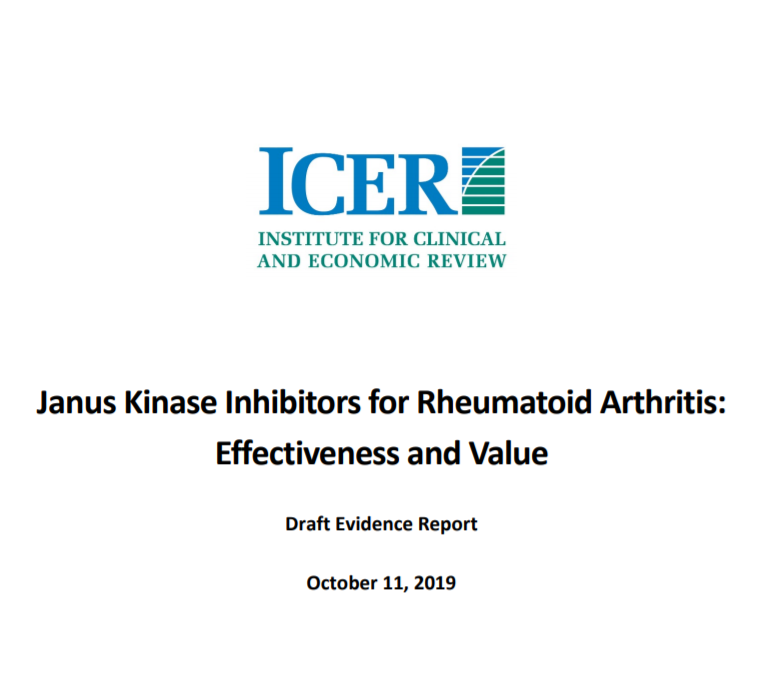 Patients Rising Now appreciates the opportunity to provide our comments on ICER’s October 11th Draft Evidence Report “Janus Kinase Inhibitors for Rheumatoid Arthritis.” We are also encouraged that ICER delayed the release of the draft report to revise and update its methodology and data so that the draft report better included “economic modeling with how patients transition between these therapies [evaluated in the report] in the real world,”[i]  including using “a three month cycle length [for therapy switching] because we understood from clinicians that this more closely aligns with the clinical strategy used in the recommended treat-to-target approach.”[ii] We see this as a positive step for ICER, and indicative that ICER may be trying to better align its work with real-life situations.

Our specific people-focused comments about the draft report are organized below into sections about People-Centered Perspectives; Data and Analytical Uncertainties; and Additional Points. Within those sections we have identified specific questions or points for ICER to respond to with this symbol ».

These problems lead us to conclude that, unlike the deep dives and extensive discussions ICER’s reports contain about other topics related to particular treatment options, the draft report’s superficial discussion of biosimilars does not contribute to the substance of the draft report. »We would recommend that ICER delete this information from its report on JAK inhibitors, and if ICER determines that biosimilars are an important issue on which the organization has insights to contribute to the ongoing policy discourse on this issue, then it should create a report specifically about biosimilars, such as it has done for indication specific pricing.[xi]»

Rheumatoid arthritis (RA) is a serious, complicated, systemic autoimmune disease that is often thought of as simply being a disorder of joints.  However, unlike osteoarthritis – which can be viewed as isolated joint damage secondary to injury, overuse, or anatomical problems – RA can cause significant problems in other organs including the cardiovascular system, lungs, and eyes. Therefore, although we recognize that the clinical studies and metrics related to treating RA focus on joint damage (as well as some markers of autoimmunity and inflammation), we urge ICER to expand their person-focused perspectives in the report with greater discussion of those non-osseous manifestations of RA.

The draft report does a respectable job of including people-centered information and perspectives in its description of RA – including the real-life impact uncontrolled RA has for people[xii] – and reviewing some patient focused data sources, patient survey information,[xiii] and caregiver perspectives. However, given that some of that information is dated, we believe it would have been preferable for ICER to work with organizations such as the Arthritis Foundation to conduct new surveys or focus groups to update that information since there are new treatment options for RA and the overall contours of the U.S. health care system continue to evolve.

Overall, it is very good news that the JAK inhibitors provide clinical benefit for people with RA, e.g., “JAK inhibitors plus conventional DMARDs achieved low disease activity and remission at three and six months by multiple measures of disease activity (Appendix D) compared with conventional DMARDs alone”[xiv] – at essentially the same price. And similarly, that “upadacitinib resulted in patients spending approximately one more month on average (over the course of a year) in remission compared to the use of adalimumab,”[xv] which is an outstanding improvement from a patient’s perspective. However, we note that the minimal price/cost differential in the draft report does not necessarily translate into similar costs for patients because – as you know – health plans’ formulary coverage and co-insurance tiering can result in very large cost changes for patients.

On that topic, we appreciate the discussion about how “patients fear restrictions on access to certain types of drugs, as well as more general restrictions (e.g., stopping and re-starting therapy, requirements to repeat step therapy after switching health plans, etc.),”[xvi] but would like to note that this is primarily a situation faced by people in the U.S., and that Boytsov et al.,[xvii] found 34% of RA patients were in plans with access restrictions, and 70% of those plans had step therapy requirements – which was associated with decreased likelihood of treatment adherence and proxies for reduced treatment effectiveness. Such access restrictions are particularly problematic for people with RA and similar complex chronic conditions when they switch health insurance plans, which can occur with change of employment, by relocating to a different geographic area, or by aging into Medicare. And on a related note, we think that ICER should note that the copay assistance programs (including coupons)[xviii] are not available to people on Medicare.

And we appreciate the brief discussion of the benefits to people with RA of having treatment options that are oral and do not require visits to a clinician’s office. With the ongoing shortage of qualified clinicians in rural and other underserved areas, the ability of patients to receive their care without additional access barriers is an important consideration of value to patients.

Related to access, and patient’s needs and perspectives, we are concerned that the Societal Perspective analysis only includes productivity costs. Such a narrow analytical framework might be appropriate if “society” is only concerned with economic output, but we believe that society – and its perspectives – has a much broader view that includes people’s non-working lives. For example, if the societal perspective of government action were only to include direct productivity considerations, then parks and the arts would not receive any funding, and health care for non-working individuals would be devalued. We believe this perspective of ICER is consistent with its overall reliance on the QALY as a basic analytical tool, which as we and others have noted, discounts such important societal perspectives.

»In this vein we would like ICER to specifically comment on why it chose not to include the following societal perspective parameters listed in Appendix E that are important to people and society.»

And lastly, we want to note that the “independent committee of medical evidence experts” that will be reviewing ICER’s analysis about JAK inhibitors[xix] for use in people with moderate-to-severe RA contains only one patient advocate – whose area of focus is cancer – and several medical doctors with experience in cardiology, oncology, and neurology, but none with expertise in rheumatology or immunology. We realize that ICER’s focus in selecting members for its independent advisory committees is expertise in comparative effectiveness research and cost analysis, but having only one patient representative and failing to include clinicians with expertise in areas connected to the condition under review, presents a clear opportunity for having very skewed perspectives and input, which would seem to be the opposite of ICER’s apparent objectives.

Because the treatments discussed in the report include many that have indications beyond RA – including tofacitinib, adalimumab and other TIMs as well as methotrexate, which is indicated not only for autoimmune diseases but also for oncological uses – this creates a bit of an analytical conundrum. Since ICER has written about indication specific pricing in the past,[xx] we wonder why the draft report does not explore that aspect of pricing, cost and affordability. »We would appreciate ICER discussing this issue.»

The draft report includes many assumptions that feed into the calculations and modeling. This is not a new phenomenon within ICER evaluations, but we raise it as a problematic issue because it means that the very broad range of confidence for the draft report’s quantitative conclusions is not clearly communicated, except in more technical terms, such as in this quote from the draft report: “…imputation in many instances, which affects the level of confidence in the results no matter how responsibly it is done. In addition, key outcome measures such as disease activity scores, remission criteria, and modified Sharp score have undergone substantial revision and modification over the years, are employed variably in clinical trials, and not measured in others, making cross-trial comparisons problematic.”[xxi]

Patients Rising Now is very excited that people with rheumatoid arthritis have access to new treatment options. However, we are concerned that access may be limited or barred by insurance plans and their agents through formulary design, cost-sharing structures, of prior authorization requirements. We certainly hope that ICER’s actions will not encourage such access restrictions or lead to administrative barriers for clinicians, since any of those outcomes would ultimately harm patients and increase costs for patients, employers and society.

We also believe that people’s perspectives are synonymous with societal perspectives, which is why robust and comprehensive analyses of treatment options must include people’s viewpoints and concerns. That is why such analyses will only be truly comprehensive if they embrace broad societal perspective including patients’ direct out-of-pocket costs and indirect costs related to patients’ ability to work, etc. Any analysis that is designed to ethically support society’s best interests needs to encompass real patients’ choices and goals, the spectrum of financial implications for new therapies, and practical options for increasing value for patients within the pluralistic U.S. health care system. To put it another way: we believe the voices of people with serious health conditions must be a part of defining and assessing the value of treatment options.

[xi] “Indication-specific Pricing of Pharmaceuticals in The U.S. Health Care System: A Report from the 2015 ICER Membership Policy Summit,” https://icer-review.org/announcements/isp-white-paper/

[xx] “Indication-specific Pricing of Pharmaceuticals in The U.S. Health Care System: A Report from the 2015 ICER Membership Policy Summit,” https://icer-review.org/announcements/isp-white-paper/